Choose your preferred language for translation.

This website utilizes Google Translate to deliver our content in multiple languages. For these translations, reasonable efforts have been made to provide an accurate translation, however, no automated translation is perfect nor is it intended to replace human translators. 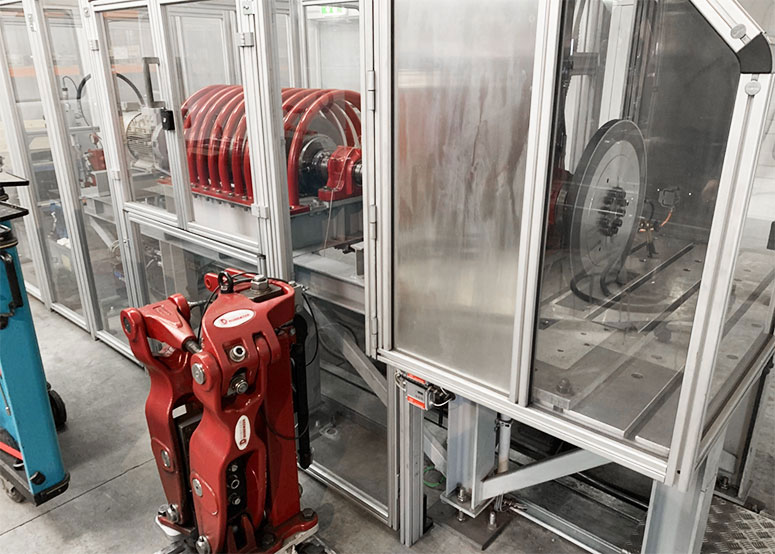 Brake products supplied by DELLNER BUBENZER will be tested by two new dynamometer test stands at the manufacturer’s research and development center in Betzdorf, Germany.

DELLNER BUBENZER makes high performance disc and drum brakes for cranes and other severe duty applications, as well as complementary products, such as emergency and storm brakes. One test bench is used for smaller caliper and drum brakes and the other for larger caliper and hydraulic brakes.

The testing facility is particularly applicable to products supplied in the USA to Association for Iron & Steel Technology (AIST)—formerly Association of Iron and Steel Engineers (AISE)—standards and those that meet the rigid requirements of Deutsches Institut für Normung e.V. (DIN), the German national organization for standardization.

As Joel Cox, president at DELLNER BUBENZER USA explained, products for wind energy and storm brakes are subject to more specific testing as they do not always rely on “spinning” as much as “grabbing”.

Cox added: “Our goal was to not only build a testing center that could work with today’s highest capacity equipment, but also tomorrow’s. Given the pace of evolution—we recently installed a series of Twin Safe TS800 brakes on two 10,000-metric ton (22 million pound) capacity cranes and auxiliary hoists aboard a giant semi-submersible crane vessel—that vision required us to think big. To have a proven, repeatable product you must endure the most rigorous of design and testing processes and in these new dynamometer test stands we have that.”

Cox explained that the pair of testing units are in addition to a thruster dyno test bed at North American headquarters in Flemington, New Jersey, where prospective and existing customers can see six of the company’s most popular brakes and couplings undergo thorough examination. The system is also used for in-house training and employee inductions.

Back in Germany, where the testing center runs under the watchful eye of Johannes Hammelrath, the new dynamometer test stands boast some staggering numbers. For example, the diameter of the test brake discs range from 560mm to 1,200mm, depending on the test brake; the maximum braking torque (static and dynamic) is 30,000 Nm; the maximum speed is 2,200 1/min; and the mass inertia is adjustable in steps from 50 to 1,000 kgm², via coupleable flywheel masses. Cox also pointed to the maximum energy (without brake disc) of 25,000 kJ at 2,200 1/min; and maximum braking performance of 3.5 MW at 2,200 rpm and 30,000 Nm.

He said: “Hundreds of our products have already been tested at this new center. Typically, products are tested upon design of the units in production batches. We also are asked sometimes for proof testing; we can pair up a given disc with pads and burnish them in for a small fee and prove given torques—not just static paperwork.”